After a whirlwind few days in Cairns, we were off to resort town Port Douglas, an hour’s drive away. 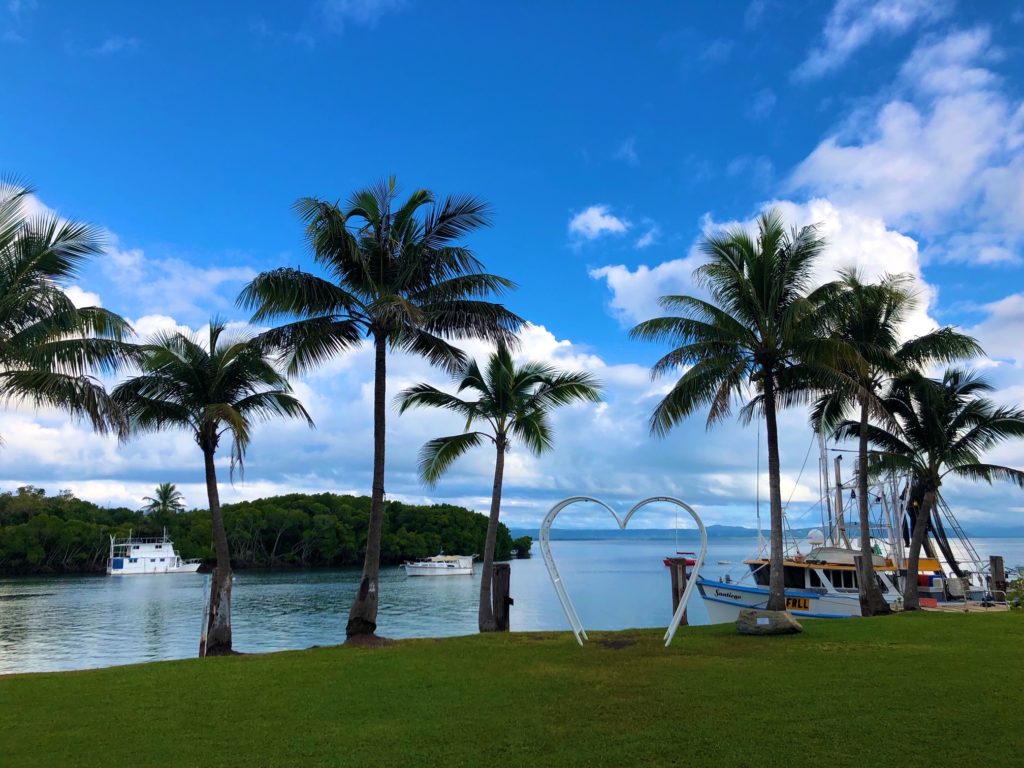 We picked up our hire car from the airport and stopped in at Palm Cove, half way between the two, for a juice and wander along the coastline. It was true tropical beauty! 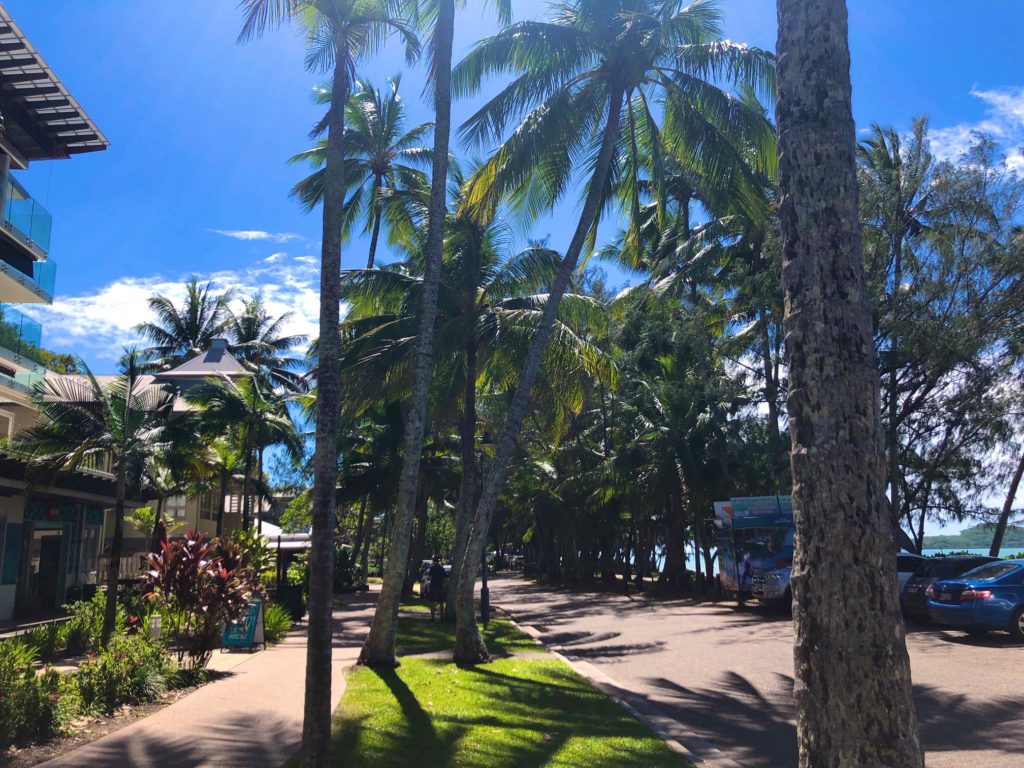 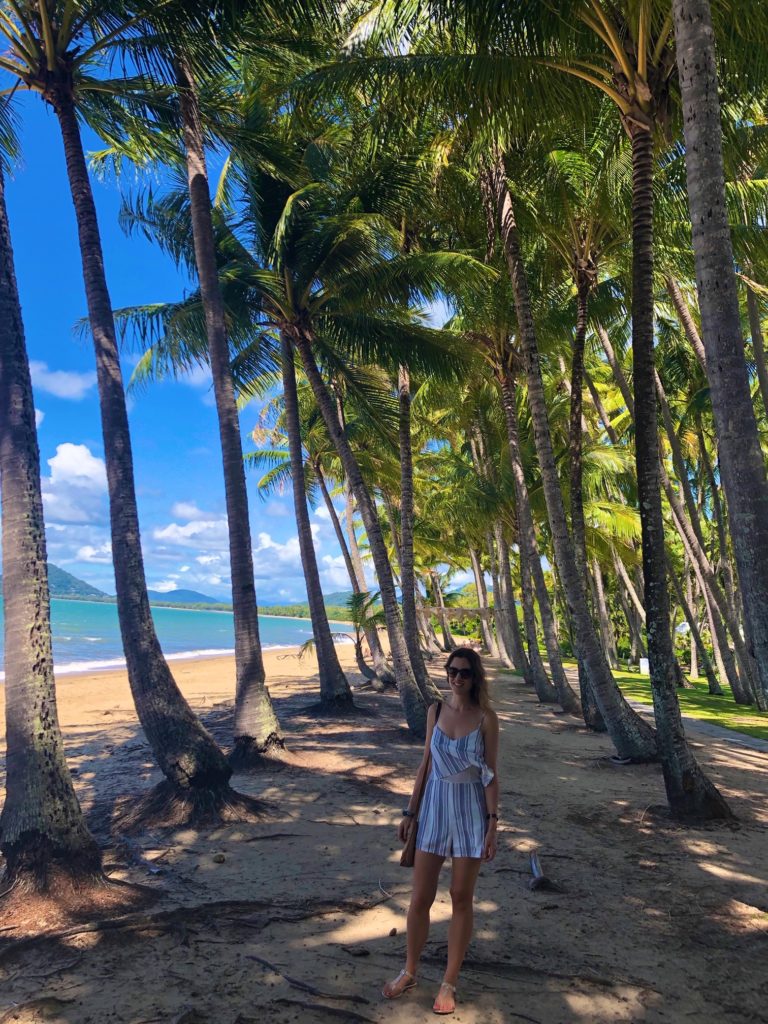 We had a photo stop at Rex Lookout overlooking Trinity Bay and the coastline of Great Barrier Reef Drive – quite spectacular! There was someone taking off for a hang glide while we were there. 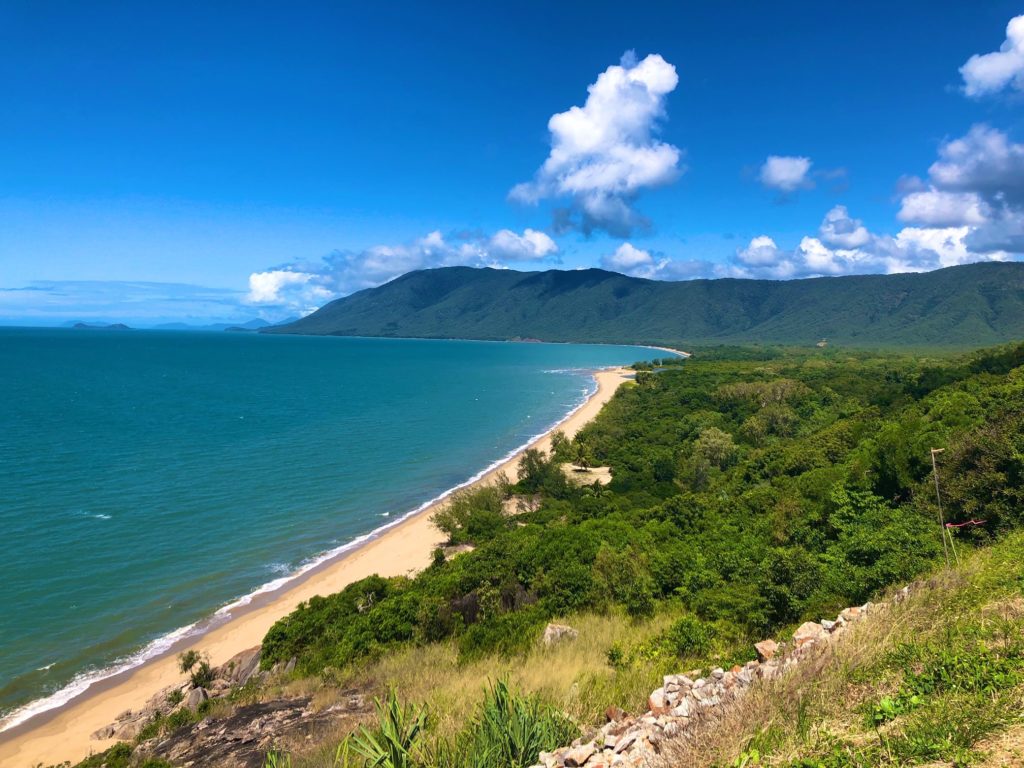 After checking in to our resort we went for a walk along Four Mile Beach to town which is a long way! The beauty of yellow sand in between tropical plantation and the ocean is an understatement – the contrast is amazing. 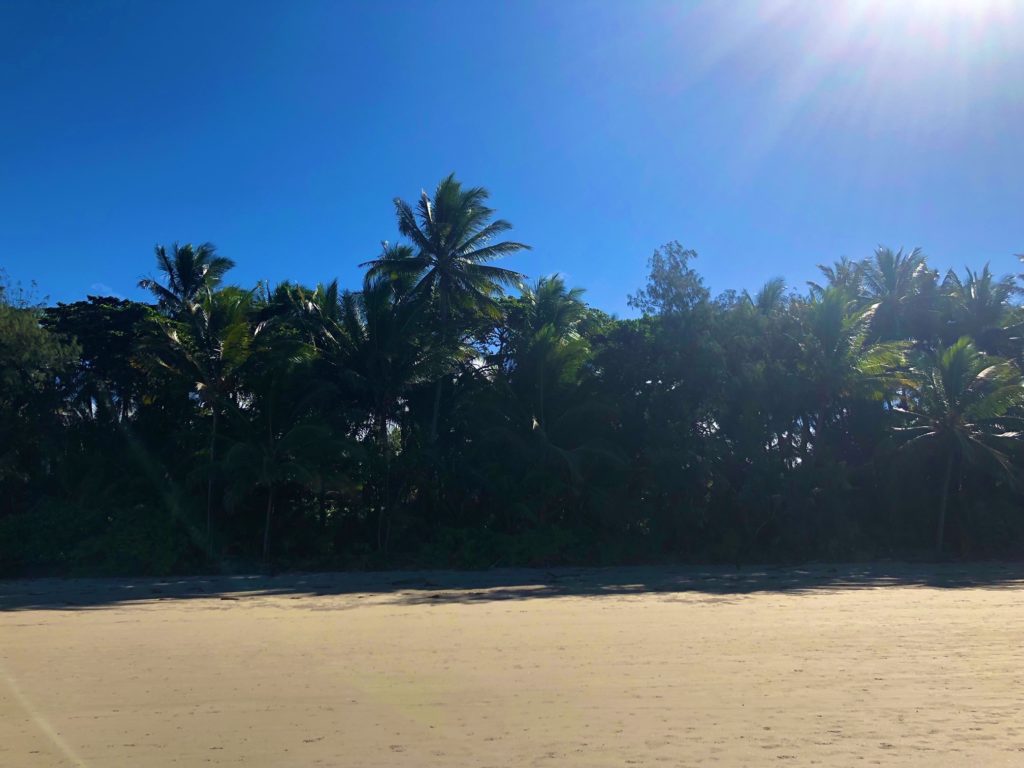 We were there at the end of April and it was still marine stinger season so the beach wasn’t appealing for a swim, with nets used to create a safe swimming area, but it was nice to take in the overall picture. 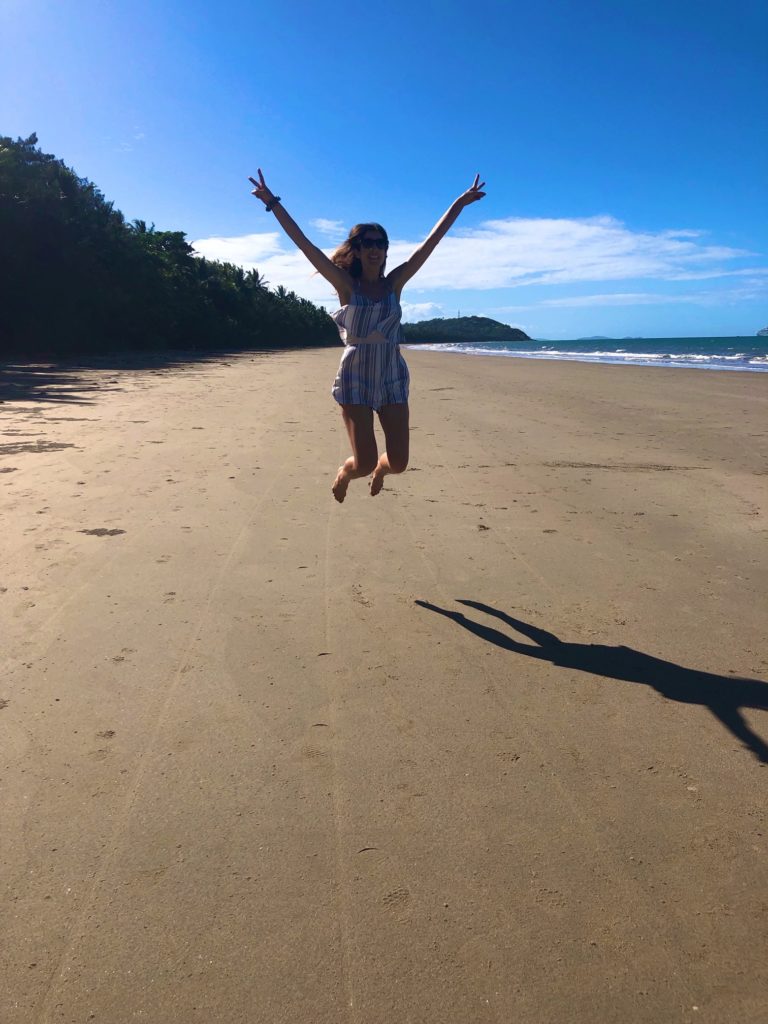 Keeping amused along the four miles

We walked around Four Mile Beach Lookout and the cliff edges and were well and truly exhausted and dehydrated by the time we made our way to Rex Smeal Park. It was a beautiful spot to take a photo through the palm trees as the sun was setting, and is a popular spot for weddings. 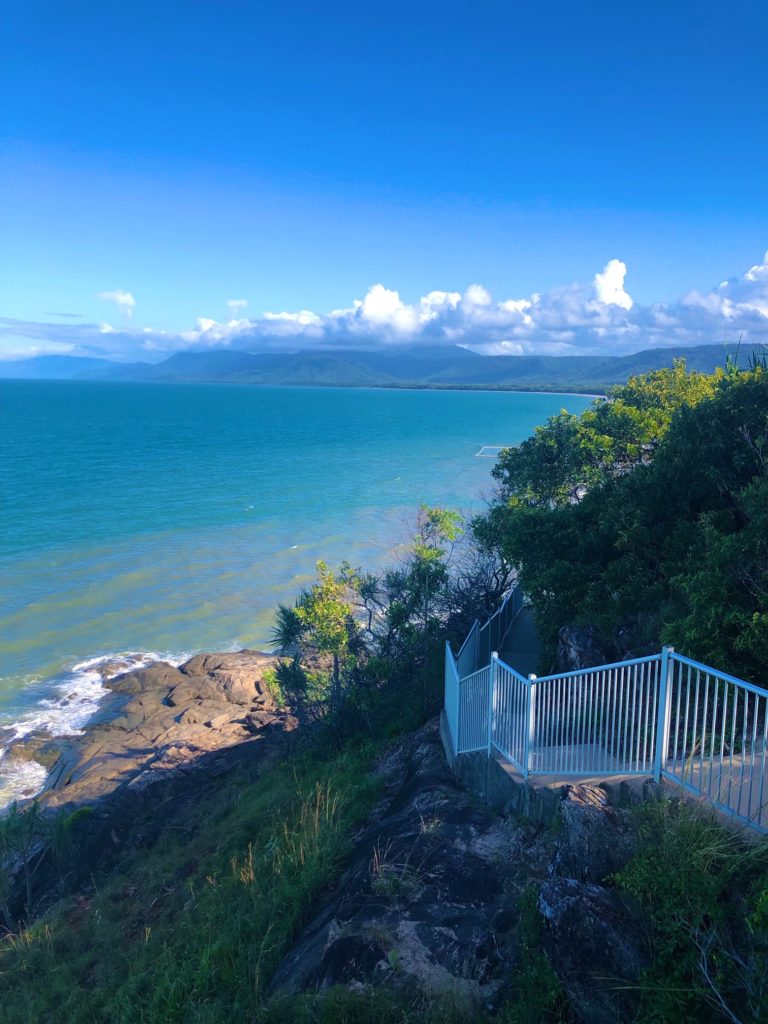 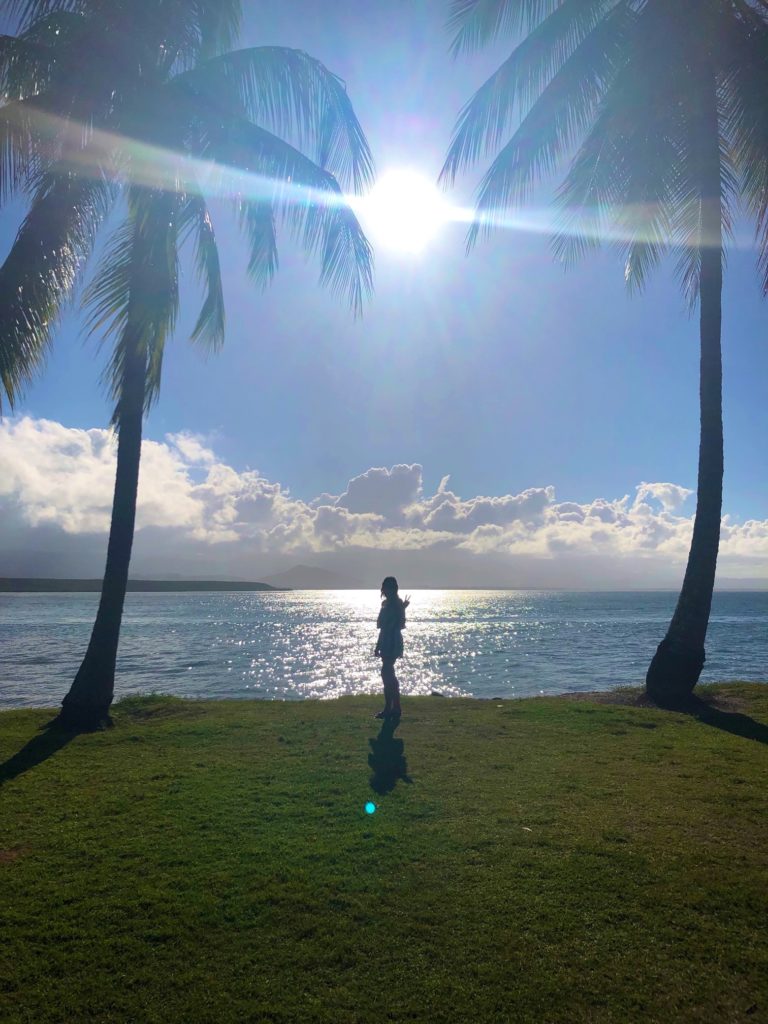 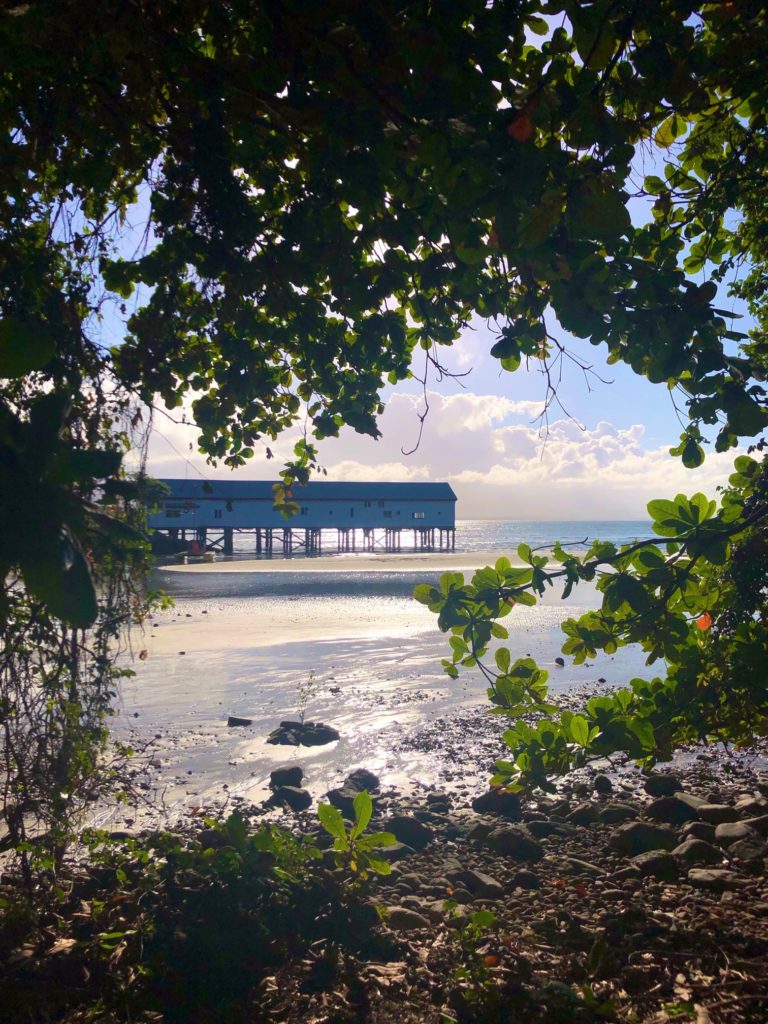 We made our way through the town to Crystalbrook Superyacht Marina for dinner at Hemingway’s Brewery – a Tropical North Queensland brewing company. We enjoyed a light salad and pale ale and soaked in the beauty of the marina while the sun was setting. 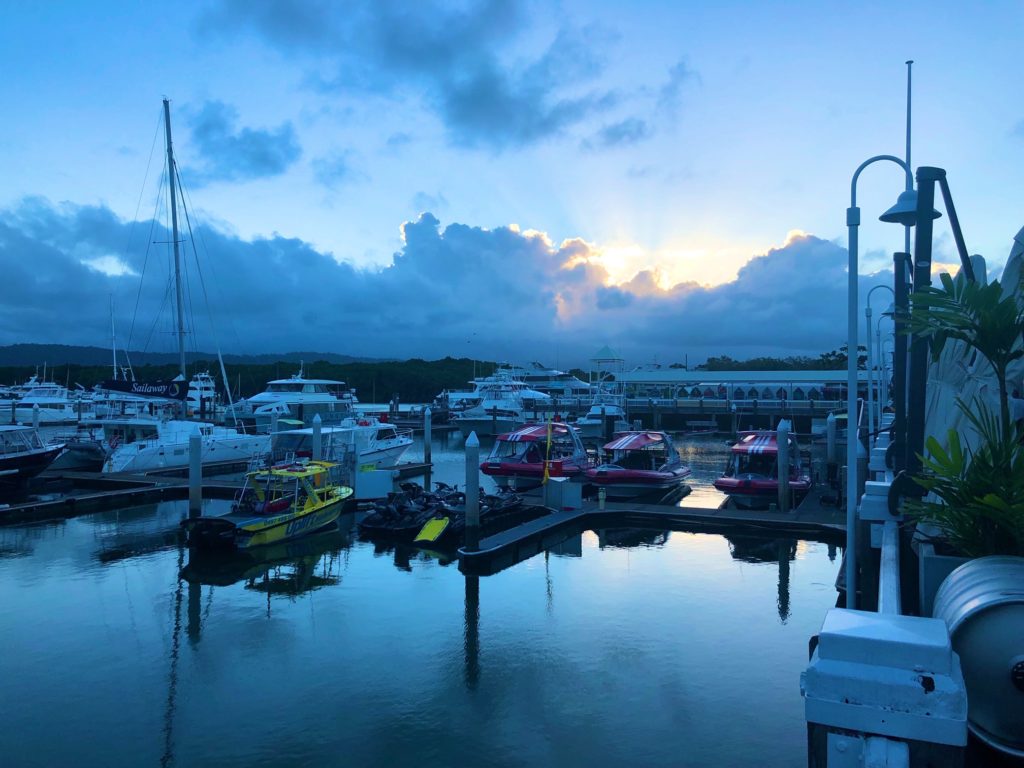 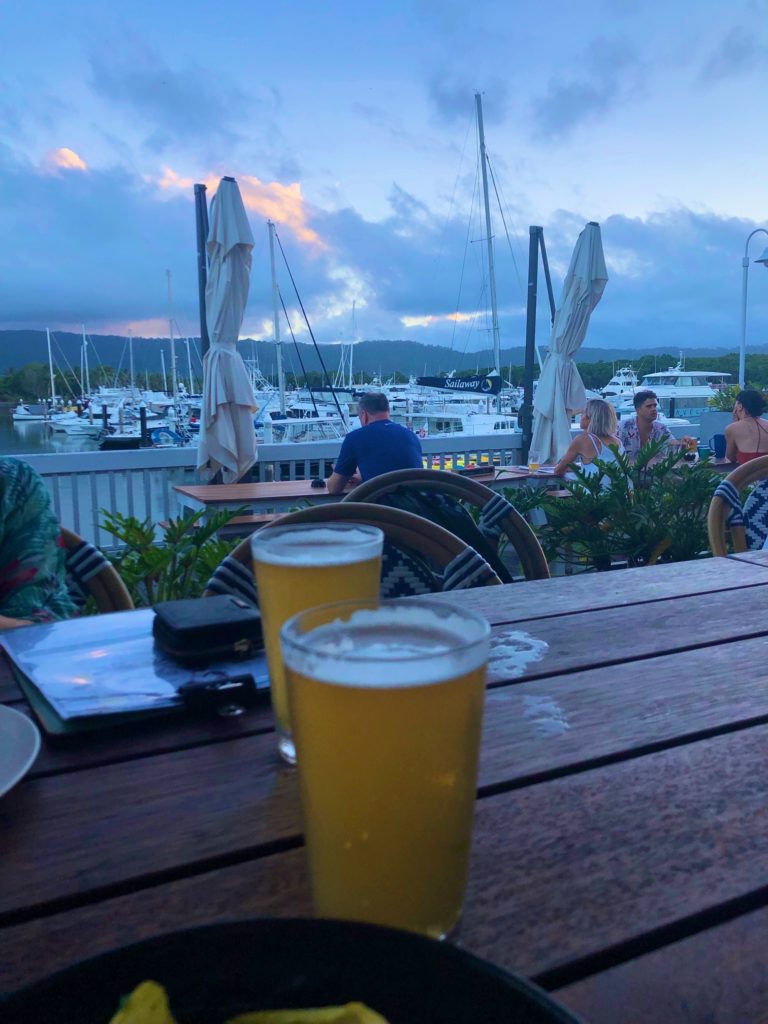 The next day we had a full day in the Daintree Rainforest, one of the largest and oldest rainforests in Australia. It began with a walk through the rainforest at Mossman Gorge where we heard about the different flora and fauna and the history of the area and saw the rapids of the gorge. 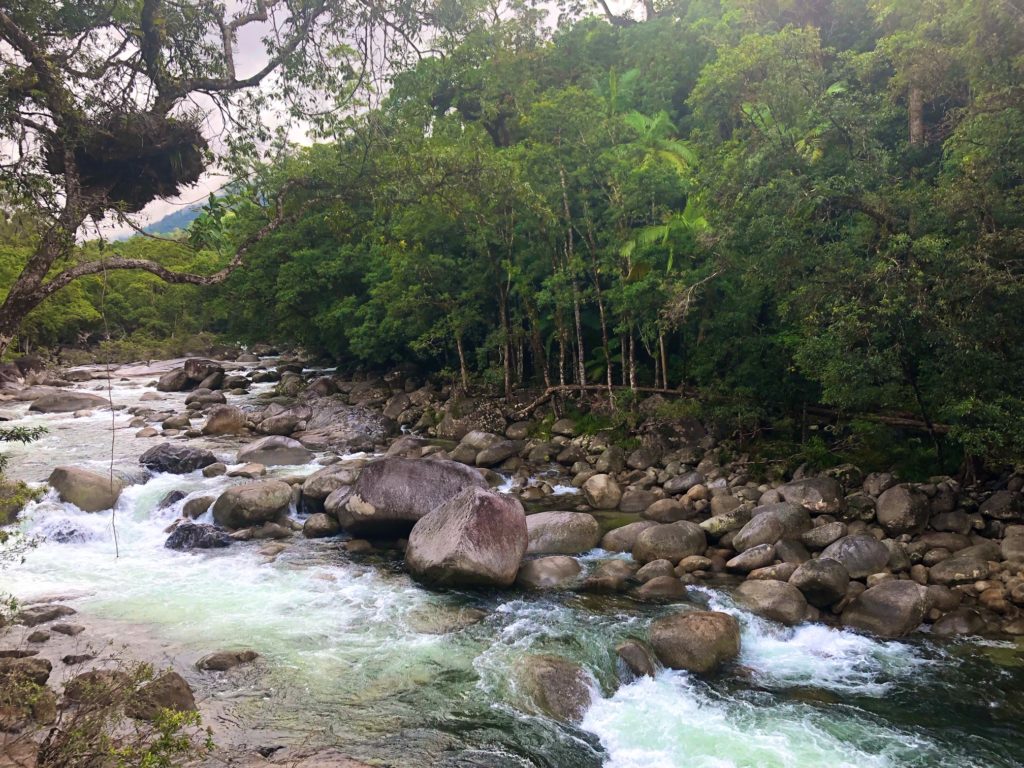 We were taken on an hour cruise of the Daintree River where we saw saltwater crocodiles, birds of prey and tropical trees. 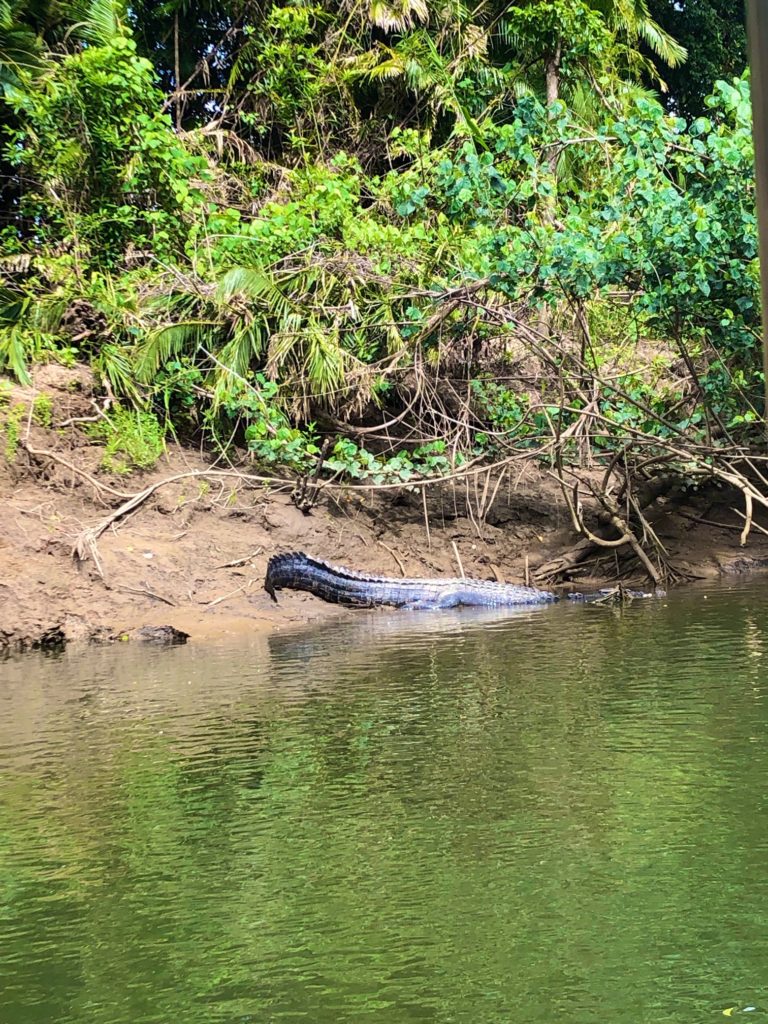 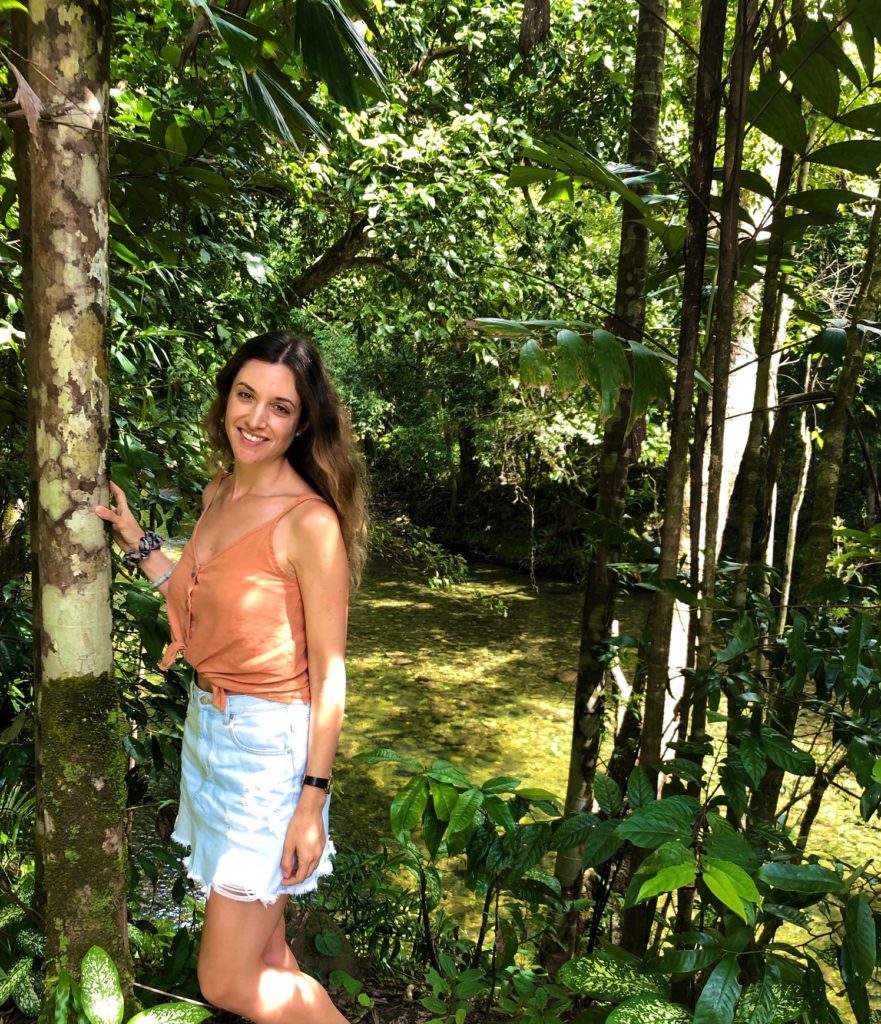 Lunch in the rainforest 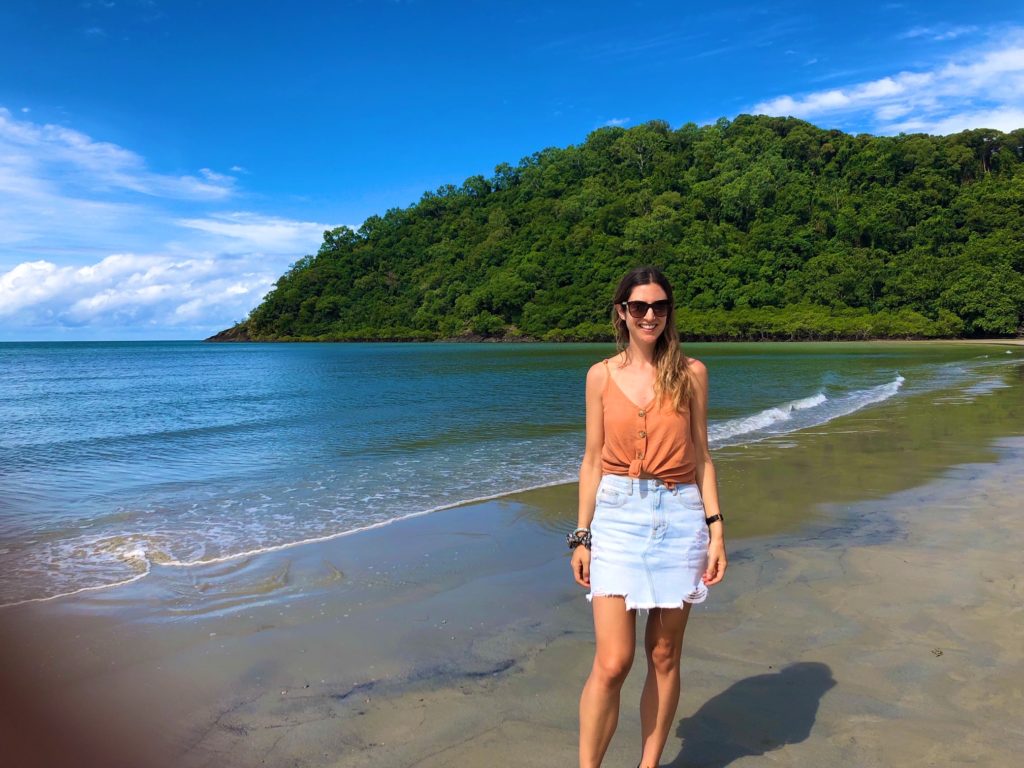 Cape Tribulation where the rainforest meets the reef The day ended with ice cream at the Daintree Ice Cream Company before making our way back to the cable ferry crossing bound for our resort. They produce ice cream based around the fruits of the rainforest and you are given a cup with the four flavours of the day for $7.50. Our flavours were black sapote, Davidson’s plum, mango and wattle seed – refreshingly delicious! 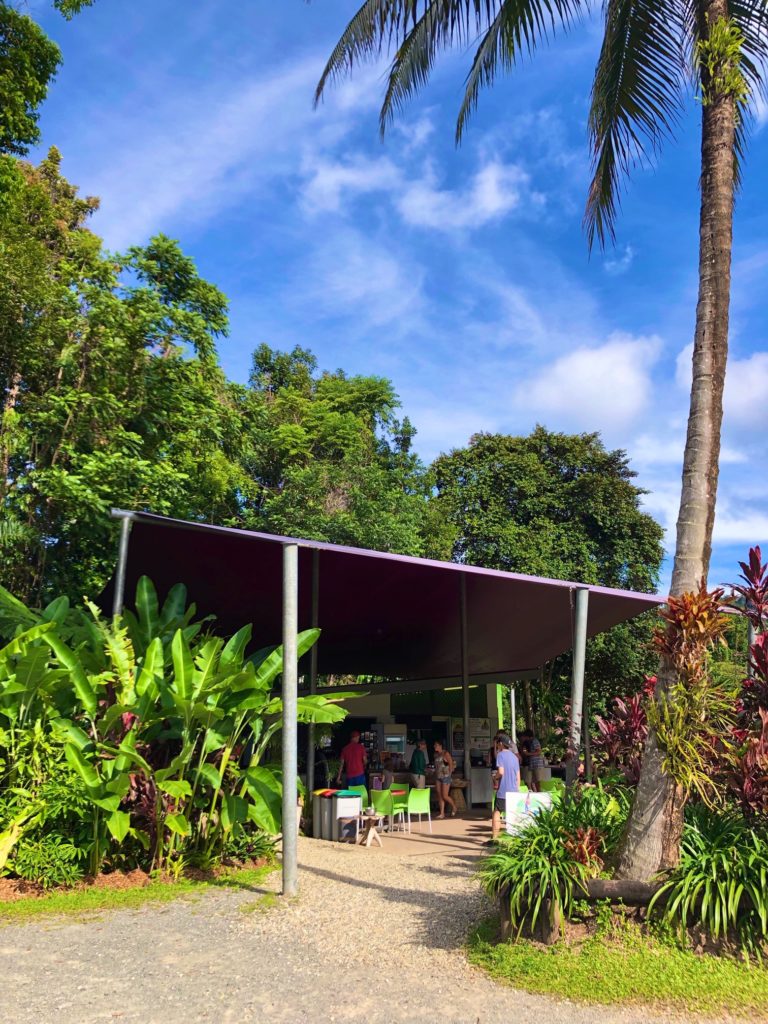 We tried to dine at The Court House Hotel on our return to Port Douglas but the kitchen closed due to too many orders. It was a pleasant reminder we were in a small resort town but it seems so strange to turn down business. We had dinner at N17 Burger Co instead which had the same situation though a smaller wait time. 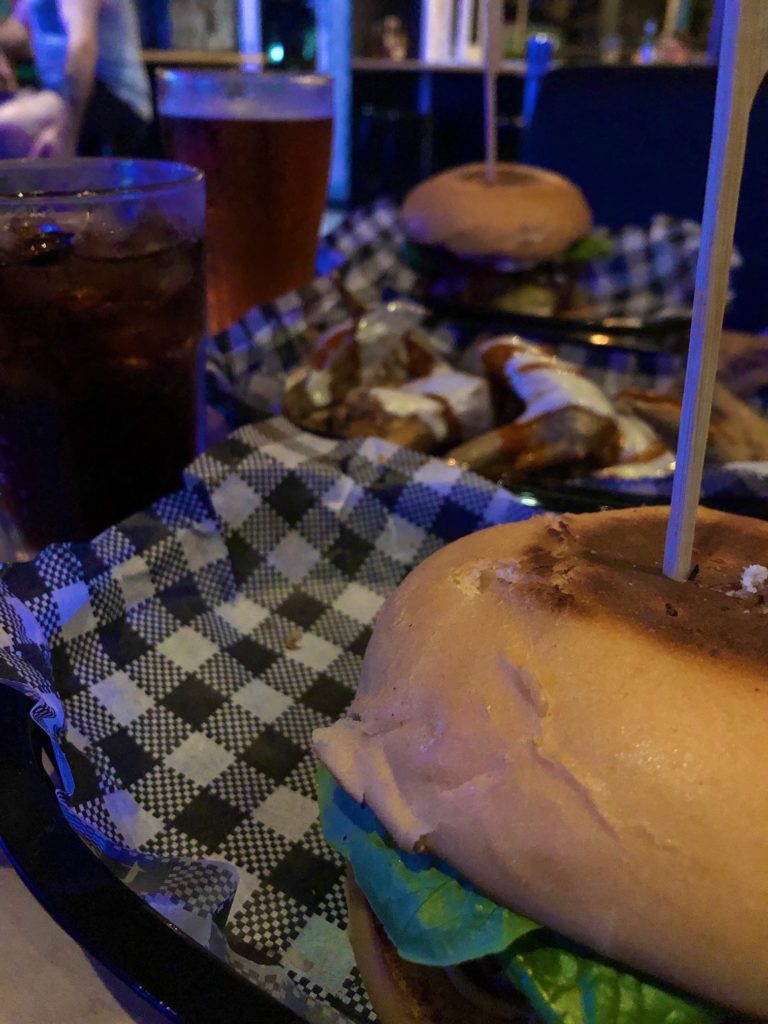 The next day was Great Barrier Reef snorkel day for me while mum had some down time back in Port Douglas. I went on the Silversonic ferry to the outer reef and we visited their three reef stops – Turtle Bay, Nursery Bombey and Coronation Corner. Snorkel day at the outer reef

Turtle Bay did not mean it was full of turtles. We saw lots of variations of coral, some colourful but mostly brown and lots of marine life. My favourite were the Queensland gropers – they are huge and make the funniest facial expressions! Others I snorkelled with saw reef sharks but I missed them once again.

The day included stinger suits (which were a requirement to jump in the water), snorkel gear, morning tea, lunch, afternoon tea and marine biologist talks. There was also the option to dive from beginner level. That night we dined under the stars at Chilly’s Pizza & Trattoria. It was such a relaxed but nice dining experience. Totally wouldn’t work during a down pour but we were spoilt with amazing weather and only had to fight off the mosquitoes. We shared a prosciutto pizza and a linguine frutti di mare. After we went to The Court House Hotel for a drink and to enjoy the live acoustic guitarist. The pub had a different live music artist every night.

We spent our last full day exploring the Atherton Tablelands and I will share this in a separate post.

Our last night in Port Douglas started with a cocktail at Jimmy Rum’s Mixing Lounge and finished with tacos and fried jalapenos at The Mexican – delish! Taco time at The Mexican

Every Sunday the Port Douglas Markets run from 8am until early afternoon in Market Park. We had a quick wander around the local artisans and produce before our drive back to the airport. Unlucky or lucky for us it started raining this morning so we rushed through the markets and grabbed some breakfast before making our way to the airport – at least the day was a travel day and the weather wasn’t too important to us! I really enjoyed the resort feel of Port Douglas. While we didn’t get to make the most of the resort as we were adventuring every day, it was nice to be able to come back at the end of the day and enjoy a dip in the pool. The rooms were also super spacious for some unwind time. The town had a really nice small town feel with a touch of class.

In my next post I will share everything we fit into a day trip to the Atherton Tablelands.

To the tropics Road trip to Atherton

Time for another wander I think 🐚 #shellbeach #

What a true beauty to wander through 💫 highly r

Right before I nearly fell in ☺️💕💫 #pink

Fun climb up the castle... sharing the wander from