I took the red eye flight from Perth and arrived in Hong Kong around 8am with Cathay Pacific. Cathay Pacific and Hong Kong airport were great – thumbs up to both. I caught my pre-arranged shuttle bus to the Kimberley Hotel in Kowloon, which was a 45-minute drive from the airport.

I had a nap while waiting for my son to arrive. When he walked through the door four bags later I was in disbelief as he’d travelled from the USA to China and Hong Kong with so much luggage. It’s great to see him and we head out to explore Kowloon. With a map in toe and one umbrella (the weather is horrible) our first stop is Avenue of the Stars. This attraction is similar to the Hollywood Walk of Fame but focused on Chinese stars, and like everyone else, we snap photos of Jackie Chan and Bruce Lee. It’s in a great spot but when it’s cloudy, foggy, rainy and humid its just not much fun at all. By this time the bottom of my jeans were drenched, my shoes full of water and my hair a frizz ball! 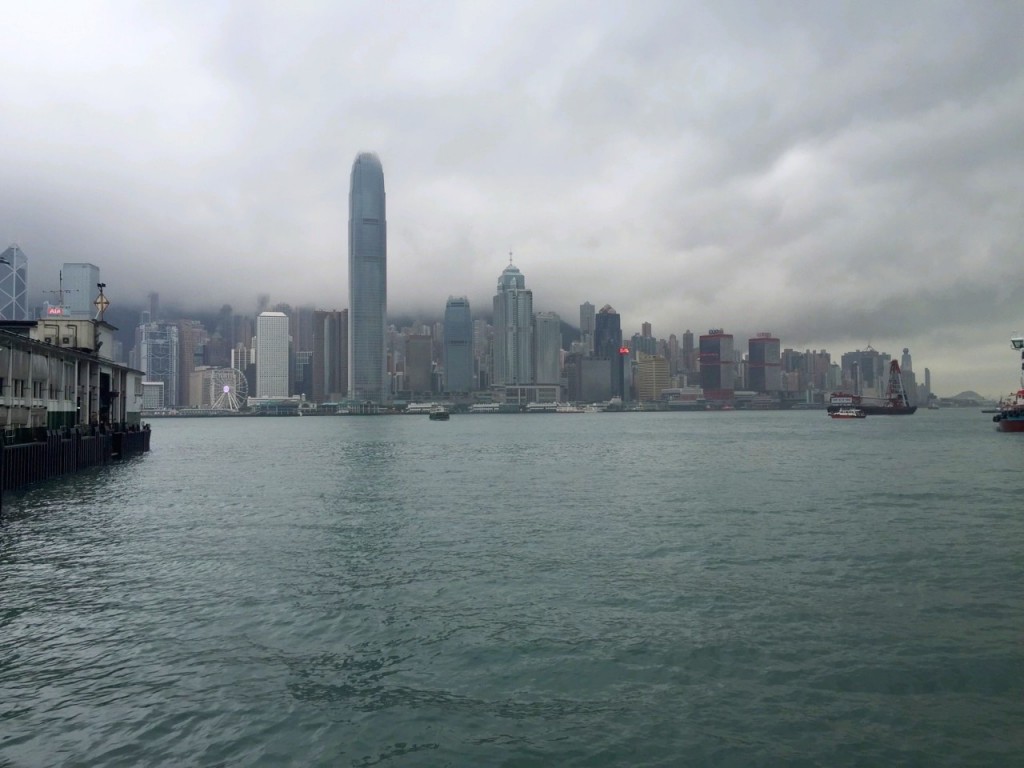 We popped into Harbour City Shopping Centre for a quick look and then we visited Kowloon Park, where the birds were the most interesting part. 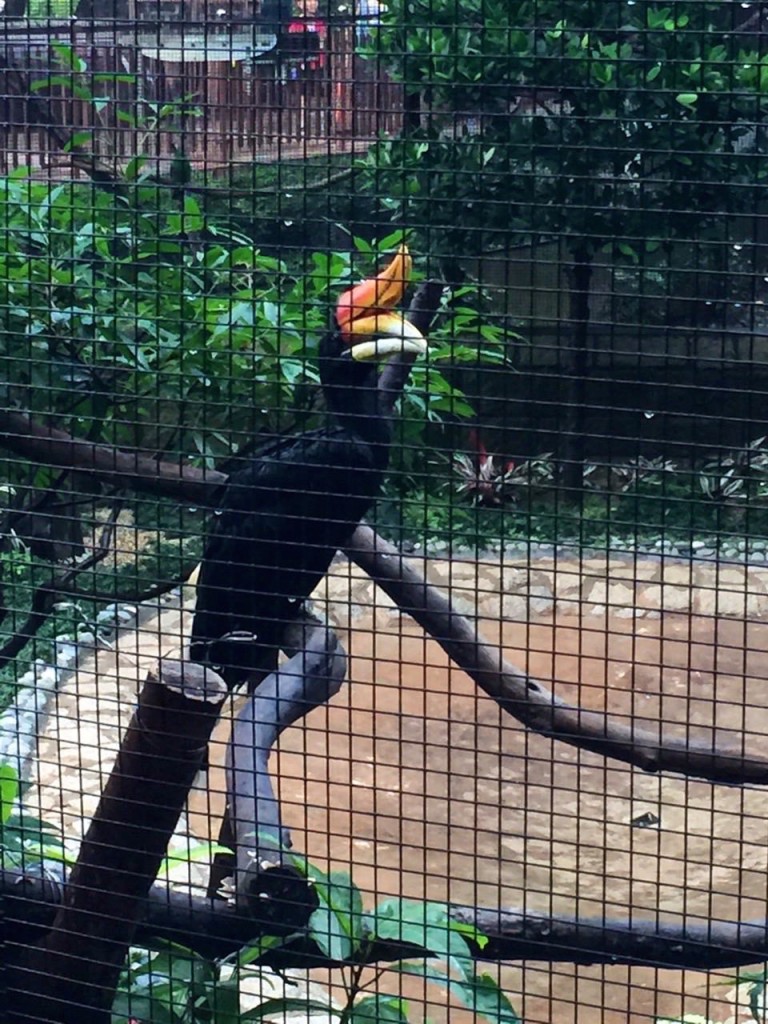 We went to Temple Street Market for an early dinner and although the restaurant we chose looked a bit dodgy, the food was fresh, yum and cheap, coming to AU$45. We tried a lot of dishes including steamed fish, beef hot pot with veggies, steamed spinach greens and fried rice. 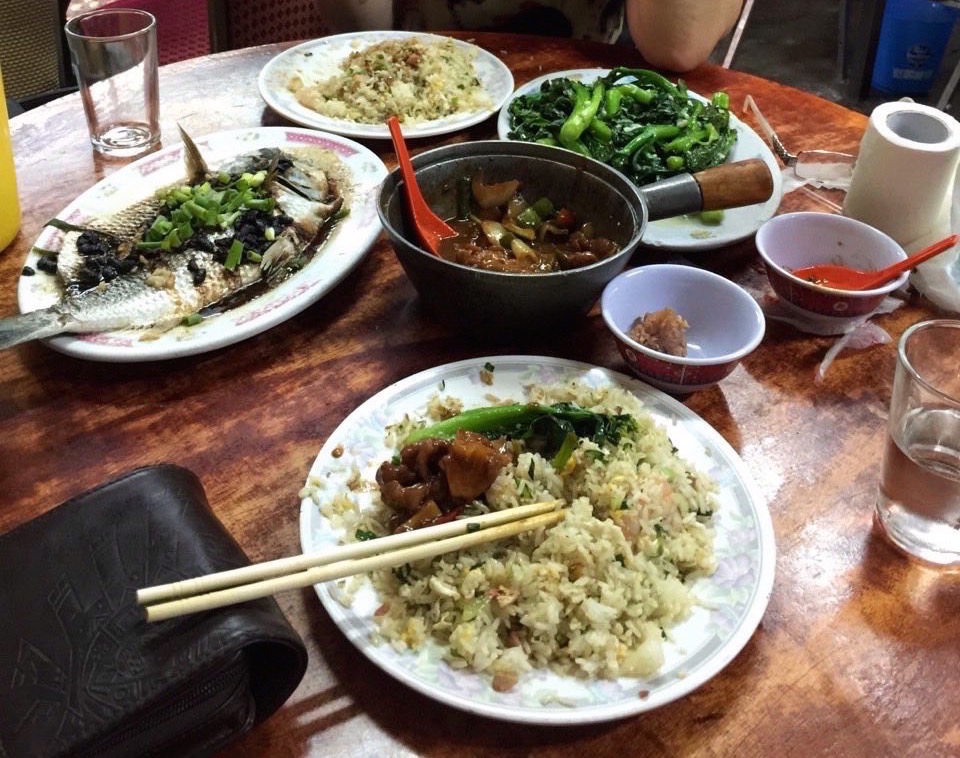 After a nap we went out to explore the bar scene in Tsim Sha Tsui. We went to a couple of bars including a rooftop bar with amazing views over Hong Kong.

Today we visited Tian Tan Buddha (the Big Buddah). It’s not the best to visit when the weather isn’t good but unlucky for us, every day was going to be bad. So we didn’t get to experience the full potential of his beauty. We took the MTR to the cable car and then took the foggy ride to Lantau Island. Once out of the cable car we began our walk to the Buddha. 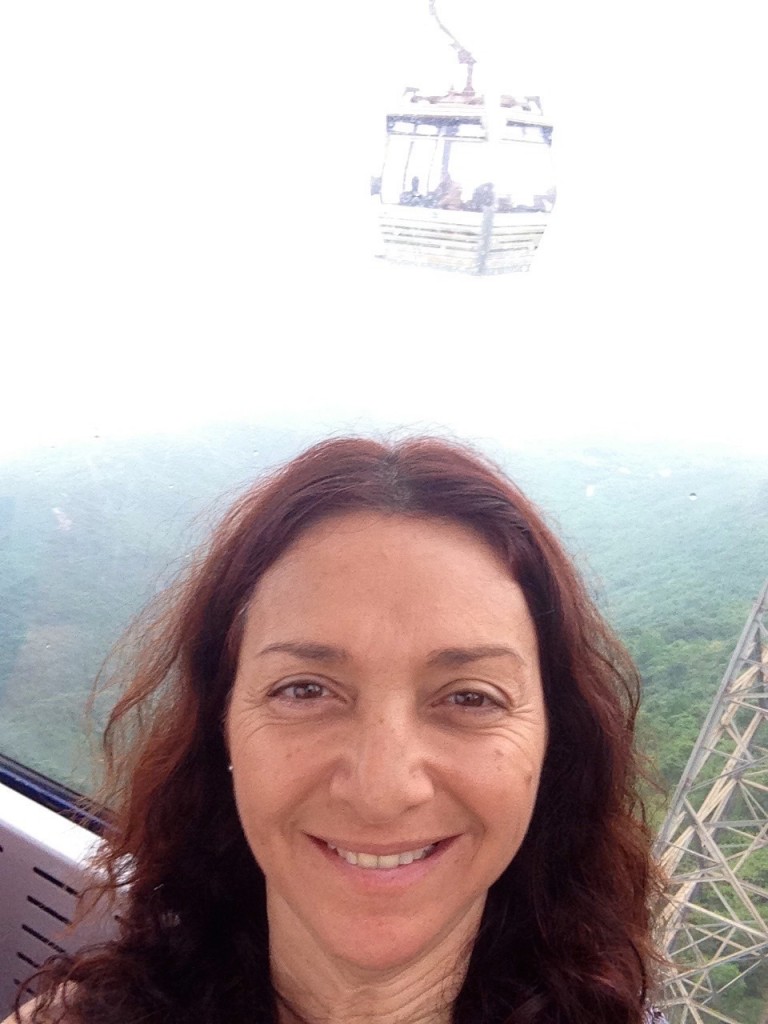 We climbed the 268 steps to the top – it doesn’t matter how fit you are, it’s hard work, and if you didn’t give up, you’re definitely panting by the time you reach the top. We tried to take the best photos but it was a bit difficult in the fog. We had a good laugh and I guess that’s life. 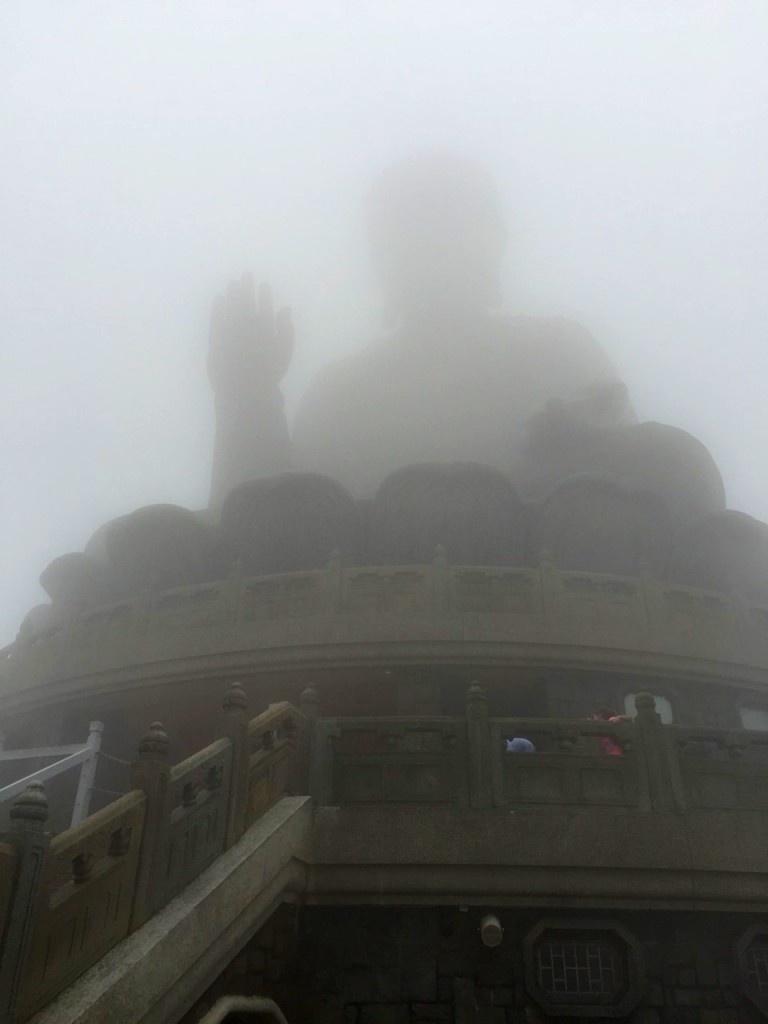 We ate some food, did a bit of shopping on the island and took the cable car back to where we caught it from and went shopping at Citygate Outlets, a discount outlet. Let loose because it’s too hard to go back. 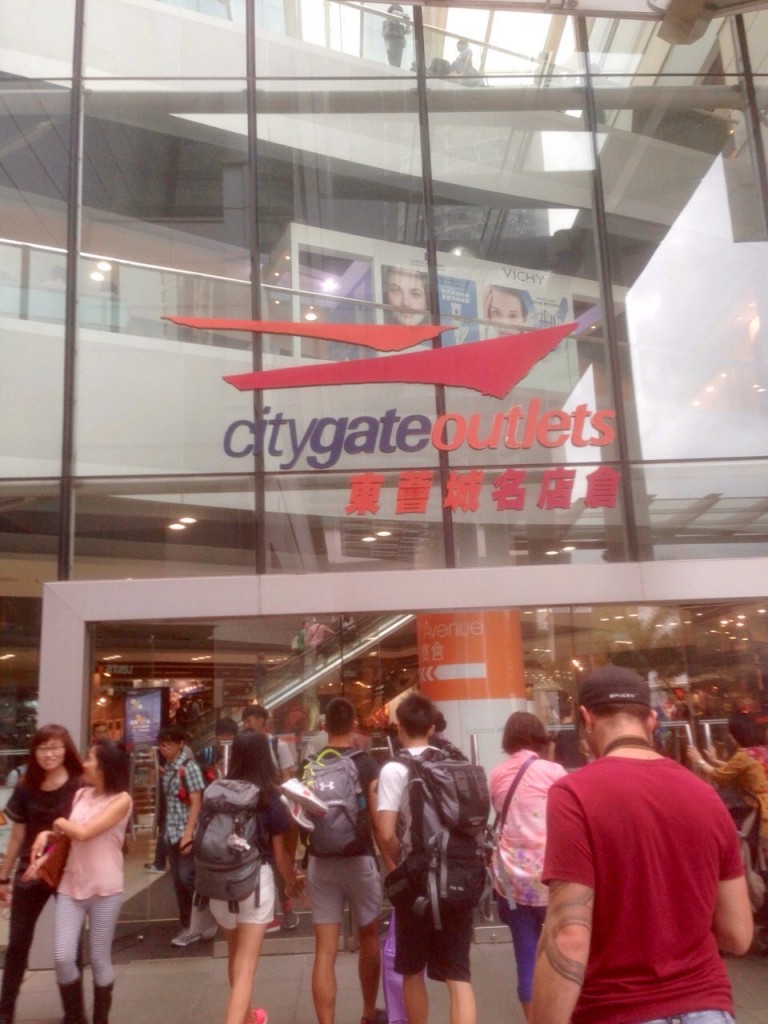 Tonight we decided to go to Hong Kong Island. We took a taxi there paying 170HK, which is AU$30. On the way back the taxi driver wanted AU$35 and we had to negotiate. Hong Kong Island is full of expats and the bars and restaurants are just phenomenal. There’s so much choice and a lot of up market and classy establishments. We settled for Italian at La Piazetta; my son had bruschetta and a pizza and I had spaghetti marinara. My pasta was fabulous but his pizza was a little sad.

We went to a bar where people were dancing and practically danced the night away four wines later. Somehow we ended up in McDonalds at 3.30am. I must say it was yum! It’s amazing what you do when you’re a little drunk and on holiday.

Today was a shopping day. We left the hotel just after 10am and went into one of the shopping centres but most shops didn’t open till 11am or 12noon. We found a Pacific Coffee Company, which is like Gloria Jean’s in Australia. This was my first official cup of coffee. It cost AU$5.80 but I’ve never seen such a big cup of coffee – for a standard size it was huge! What was good about most of the restaurants, cafes and shopping centres here was that there was always free WIFI, which gave us a chance to viber, whatsapp and check emails.

We split up and I shopped and got my hair washed and blow dried for $15.50 – bargain! I ended up with a few pairs of shoes and a couple of tops. 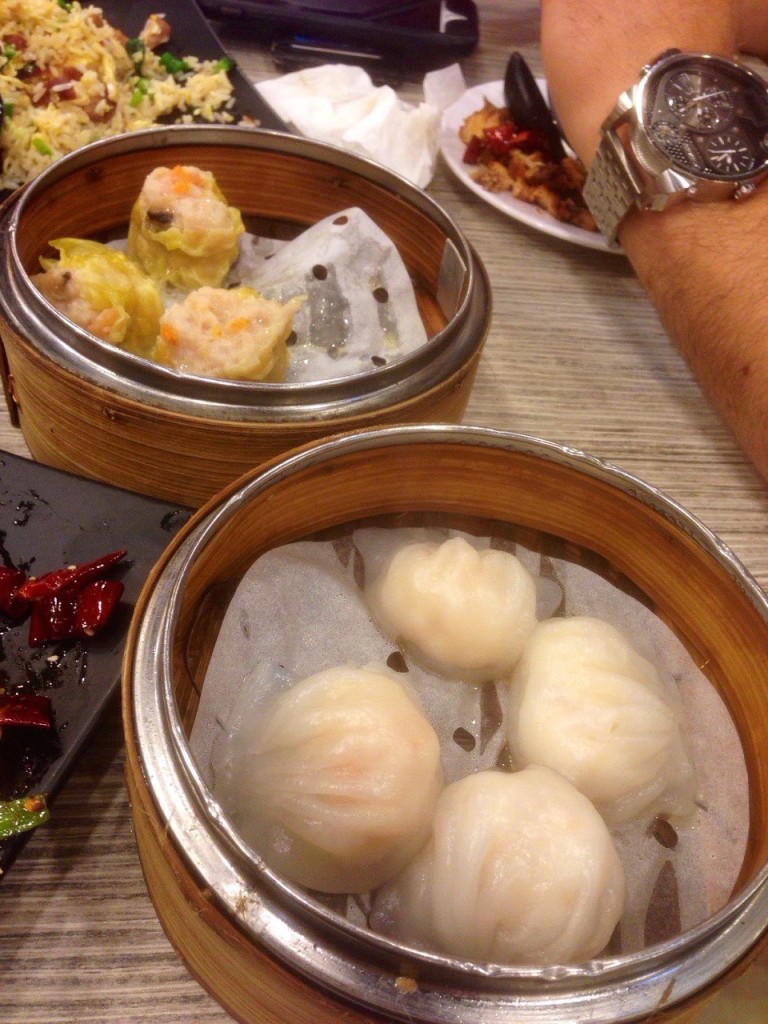 Today we explored Hong Kong Island. We took the ferry over and went on the Peak Tram. We didn’t realise it was going to be so popular. When we saw the queue my son was ready to forget it but who knows when we will be back so we persisted. It was about an hour later that we finally boarded the tram that takes you 1,300 feet above sea level. The views were fantastic but still not as clear as we would have liked it to be and at least it wasn’t raining. We explored the shops, enjoyed ice-cream and then it was time to queue up again to make our way back down. 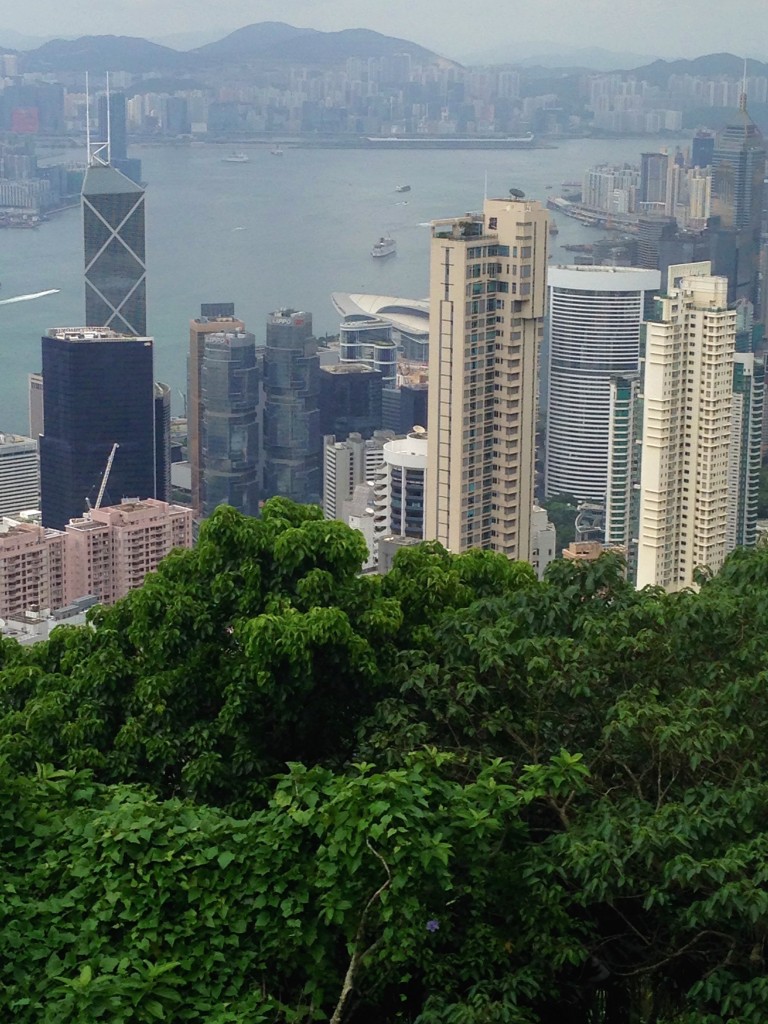 View from the top of the Peak 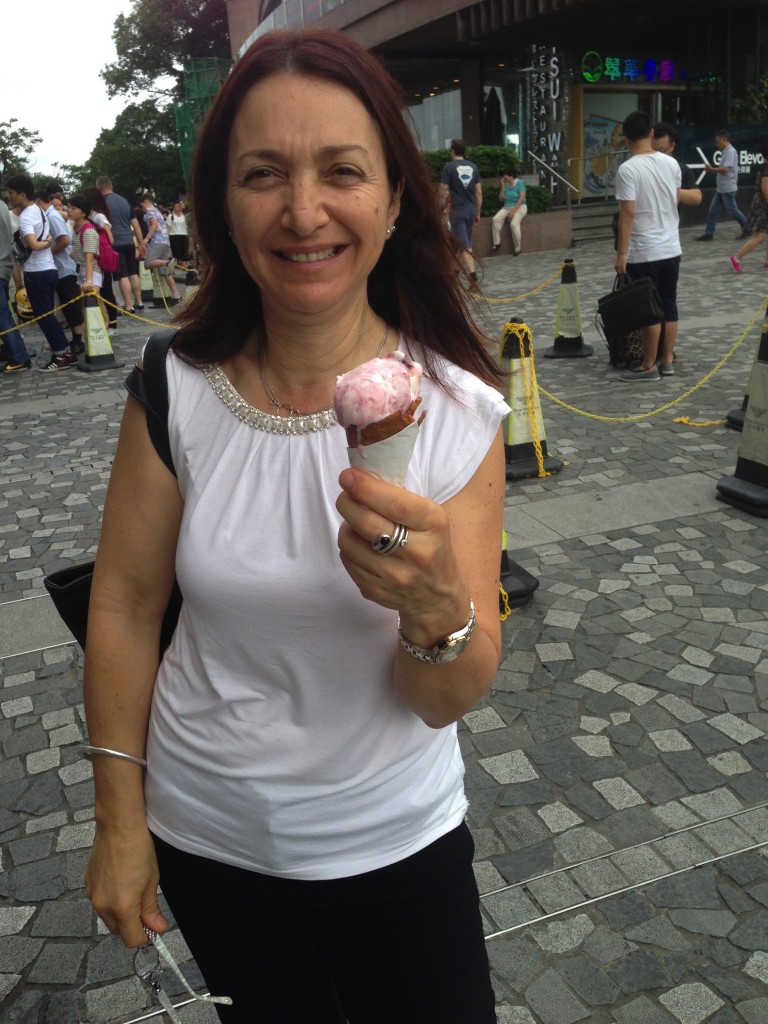 Enjoying ice-cream at The Peak

Tonight we went to the Ladies Market for a bit of shopping and dinner. We were driven towards the smell of pizza where we found HUGE pieces of pizza by the slice. I only had one slice and my son ordered two slices plus chips. Of course he couldn’t eat it all but for AU$30 it was great value. 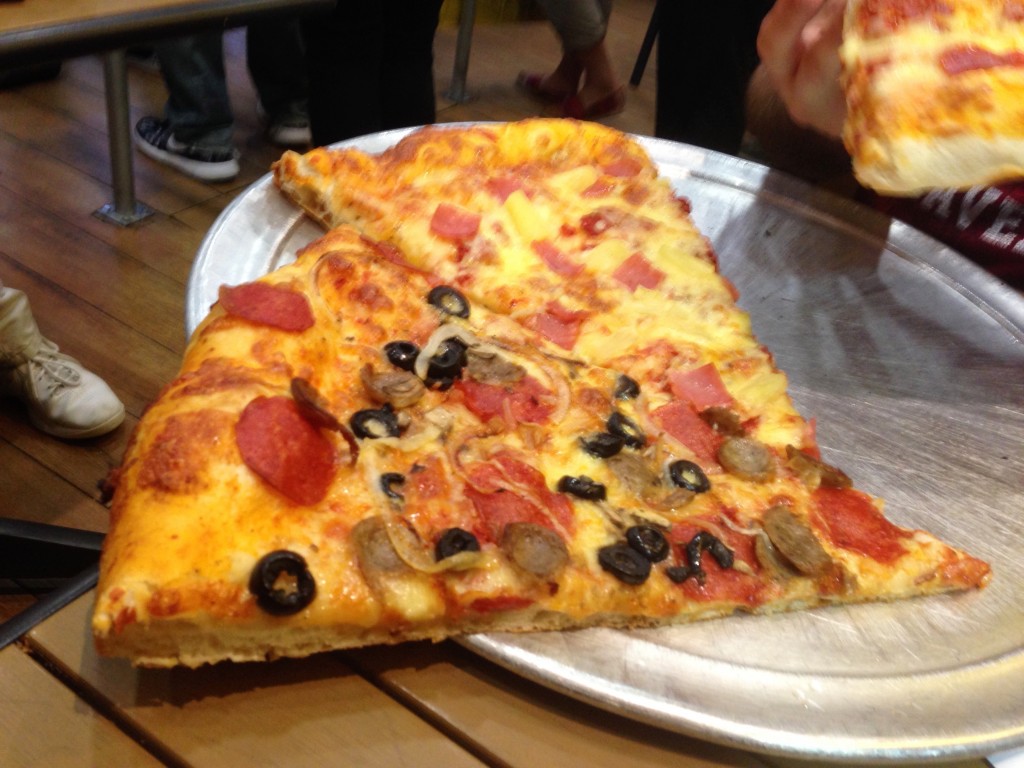 Today was our last day and with the weather improving we decided to go to Macau. We made our way to the China Ferry Terminal on Canton Road where we bought tickets paying 320HK (AU$55) return each. The only annoying thing about the day trip is that as it’s different countries you need to go through immigration on both sides, which is time consuming. Also remember to bring your passport.

The ferry ride takes about an hour each way. On disembarking we bought tickets for the hop on hop off bus and went to explore some of the big casinos of the world. We visited MGM, Wynn, City of Dreams, Grand Hyatt Macau (where we enjoyed a delicious lunch at the Hard Rock Café) and The Venetian which is definitely a must see – it was amazing and had lots of things to see and do. 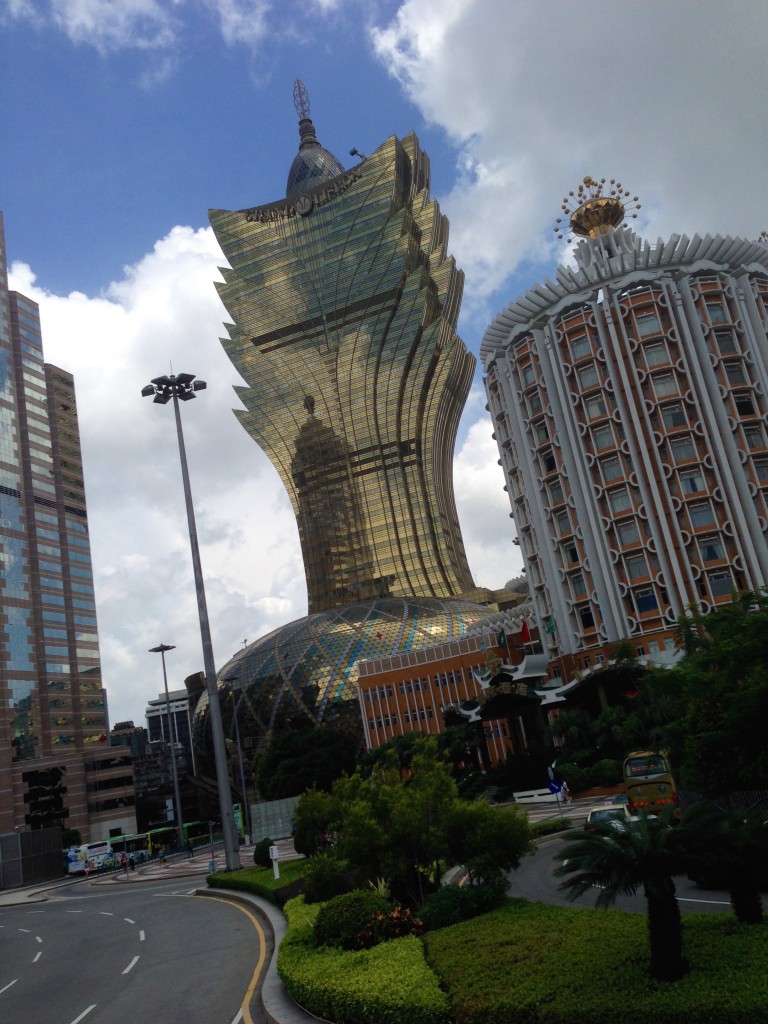 We took the 4pm ferry back but didn’t realise the return ticket we were sold was a standby ticket. We managed to get on the ferry regardless, which was good.

Tonight we did some last minute shopping and enjoyed a Thai influenced dinner inside Harbour City Shopping Centre. 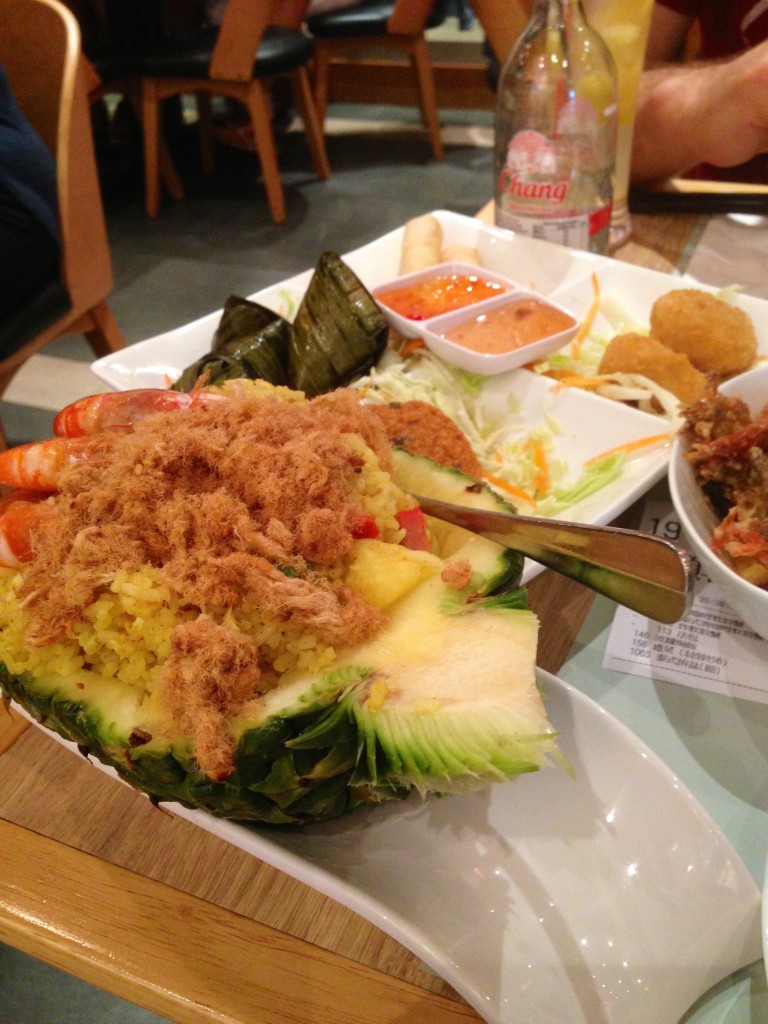 It was home time today. I enjoyed my last Pacific Coffee cappuccino before heading to the airport around midday. It was a great trip with my son and I would definitely return but with the girls next time so it’s much easier to shop.

What I love about travelling City steakhouse dining

And just like, another chapter closes. Sad to be l